“What I find interesting is working in a society with certain taboos - and fashion photography is about that kind of society. To have taboos, then to get around them - that's interesting” said controversial fashion photographer Helmut Newton (Benfey). Nudity in fashion editorials is often a point of controversy because it does just that—attempts to traverse social taboos resulting in an interesting set of power dynamics to explore. Nudity in fashion images possesses power in that its use captures attention by contesting norms and serving as a platform for social critique. Through breaking from the ordinary the use of nudity asserts a quality of rank and control rendering the images powerful. 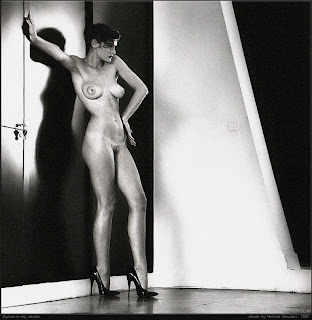 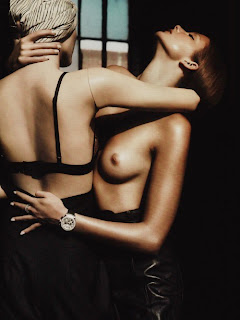 Steven Meisel is a more contemporary American photorapher who is very similar to Newton. Meisel toys with the fashion industry and it's contentions through his photographs. Steven Meisel shot a controversial spread for W magazine in Oct 2004 cleverly titled, "Asexual Revolution", toying with gender roles, nudity and sex. A photo from this spread can be seen below.

Sexuality and nudity works to add power to fashion images in that the nature of the industry is ultimately one of seduction. This nature of seduction results in fashion coming second when there is such little clothing as in these photos. This images are successful because studies have shown that women find nude and sensual iamges of women more sensual that those of men. (wwww.sciencedaily.com). This duality of the nature of the industry and what captures attention is what renders nudity in fashion images powerful.

Fashion photographers such as Helmut Newton and Steven Meisel, among others, break away from norms in fashion photography in terms of sexuality, nudity, casting and general style. It is this break from the mainstream aesthetic, an upset of the rhythm, which attracts attention. At the point of an alternate aesthetic that challenges normative conceptions, fashion comes secondary to the sex and seductive nature of the image. This concept works as a result of women being drawn to natural, raw images and finding sensuality in these images. These breaks from normative aesthetics and values ultimately empower the image, its components and its effects.
Posted by Students in Paris at 7:43 AM