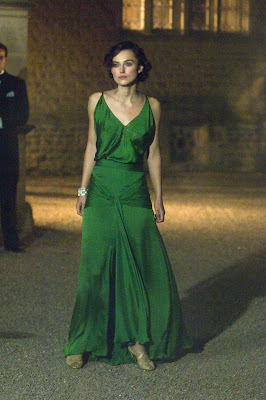 In the 2007 movie Atonement, each costume was carefully designed to not only embody the character’s personality, but also the period of the 1930s-1940’s in which the majority of the film takes place. The costume designer Jacqueline Durran designed all the costumes for Atonement as well as for the film Pride and Prejudice, and she was nominated for an Academy Award for both films. The most infamous costume from Atonement is the emerald green dress that Keira Knightly so elegantly wears close to the start of the film. The color, the style and the fit are all important in order to portray Keira Knigtleys character and perhaps foreshadow later changes in the film. It is important that the viewer remembers this dress, because it is the dress Cecilia Tallis wears the night her entire life changes along with the tone of the film. The emerald green color is striking, and the green and silk evoke connotations of wealth and aristocracy. One of the many theories is that the green also reflects the envy that her sister Bryony Tallis has at the start of the film. Durran also said she chose the color because green symbolizes temptation which is a major theme throughout the film, especially during the events that take place while she wears the dress. This is the last time that we see Cecilia Tallis wear a dress that is as youthful, vibrant, sexy, and elegant. It reflects the character’s transformation from a naïve “child” to a an adult. Durran states: "instead of being constructed around Keira's body, the dress skimmed her [frame] and added to a feeling of semi-nakedness." This dress further evokes the ideas of temptation, youthfulness, playfulness, and sexiness all while remaining completely elegant. The costume also reflects the time period as seen in the slim fit, low back and long train. These were all characteristics commonly seen in dresses during this period. This is an example of how one costume can reflect a wealth of information about a character and further enhance the writer and the director’s vision.

http://www.costumersguide.com/cr_atonement.shtml
Posted by Students in Paris at 4:14 PM