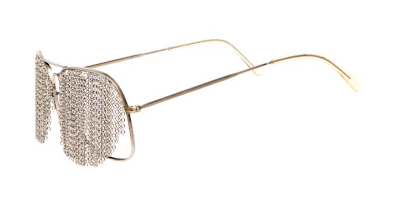 Alison Gill: Deconstruction Fashion, 1998
Gill defines deconstruction in terms of fashion as garments that are unfinished, coming apart, recycled, transparent and grunge. She says it is the literal dismantling of clothes in order to destroy fashion. To better understand the philosophy behind the statement, she looks at other forms of French deconstruction through philosophy and other aesthetic constructions. 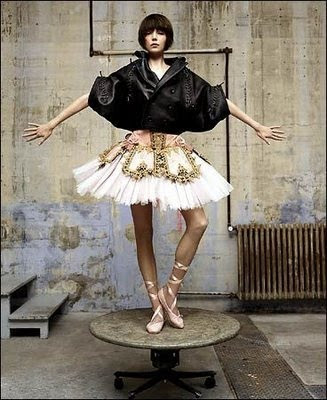 Comme de Garcons, 2006, the design combines two opposing aesthetics giving both a presence but denying either totality. Both garments are deconstructed from their original forms and are in play with one another.

The term deconstruction has been used to describe the rebellion against traditional forms in art. Amy Spindler announced the trend as a rebellion against fashion's heritage. Elements of deconstruction include vintage linings sewn on the outside of clothes, exposed zippers and seams. Basically, the garments call attention to the mechanics of production, they strip away the aesthetic illusion associated with clothes to reveal the forms of construction that lay beneath. However, the major problem with this theory is that in deconstructing fashion, you are creating a new fashion- a paradox that Martin and Koda illuminated in saying “Deconstruction becomes a process of analytical creation”

The transparency of forms in Comme des Garcons and Maison Martin Margiela, 2009

Fashion vs Art
Fashion is difficult to associate with philosophy because of fashion’s tendency towards triviality, aesthetic play, commoditized and robbed of significance. This goes against Philosophy’s staunch reverence of seriousness and authentic thought. She illuminated the question of whether or not authentic innovation can exist in fashion. She argues that fashion trends come from disseminated popular forms from history. She says that the hierarchy of fashion seems to erode because of mass production and media, but then negates this statement by saying the hierarchy of fashion lies in a theoretical realm: the idea of a “new look” creates the fashion elite.

The paradox in taking apart clothing in order to establish anarchy lies in the conscious creation of the deconstruction. The trace of construction echoes past forms thus illuminating the history of fashion and fashion’s inability to create anything new. Interestingly, this also deconstructs the hierarchy between haute couture and ready to wear. 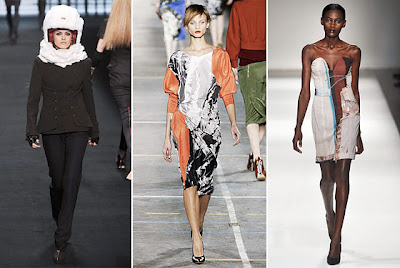 Le Destroy: Gill states that “deconstruction fashion” is an attempt to associate fashion with deconstruction in four different interpretations of “le destroy”: Anti fashion, recession, zeitgeist, eco-fashion and theoretical dress. Gill looks at these different ideas through the designs of Margiela.
Anti Fashion: Influences taken from the “street” by designers like Westwood, Gaultier, Versace, Galliano and Hamnet. Inspired by counter culture’s ability to uncover taboo sexual and political ideas, fudge gender roles and explicit nudity. Anti fashion goes against the basic purpose of clothing: functionality. It renders clothes unusable, distasteful and aged. However, it might not be “deconstructive” because of it’s direct, playful dialogue with fashion, it refuses a negative critique.
Zeitgeist: (spirit of the times). This interpretation associates decaying clothing as a response to the decaying economic, political, aesthetic and environmental crises as a mirror image of the social stress and degradation around us. Patching is said to allude to the ensuing disaster where all resources will be depleted. Could be seen as an aesthetic crisis in response to formalism. However, this interpretation seems to depend too much on history without including other influences. It images an undisputed bond between cause and effect.
Eco-Fashion: Presents the image of recyclability- literally making recycling fashionable. Could also represent the fallibility of mass/machine-produced clothing by leaving gaping holes and shreds. However, since the production of these items is not based in preservation or recycling, this argument holds little weight.
Theoretical Dress: stems from writings of Derrida who defined deconstructional analysis as “a literary backlash arguing that no work can have a fixed meaning, based on the complexity of language and usage. Liberating application of theory” Argues that by undoing the garment, it is liberated of functionality and thrown totally into the realm of aesthetics. However, this theory is debunked because clothes are not liberated from functionality because they still serve the purpose to hide nudity, also disregarded because it mixes a heavy philosophy with a light subject.
(un-)dressing deconstruction
Philosopher Jaques Derrida had troubles reconciling the word “deconstructionism” with a set definition. He said that the definition of anything claims a universal truth that cannot be validated. This questioned the formation of western society by claiming that reason is uncertain.
Tries to undefine deconstructionism saying that it is not a explainable thing, but rather an event that “goes on” 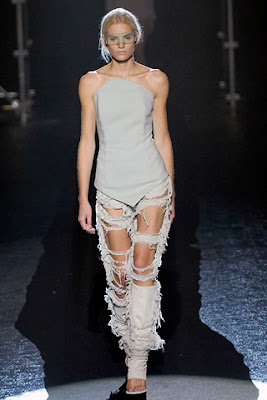 Margiela, Spring 2009
Conclusion
Gill concludes that deconstructed fashion is not physical representation of philosophy , but the dialogue between the two gives us a new way to interpret fashion. She argues that Margiela’s intent with his line is to return focus to the object. Margiela has created the idealized form of fashion by the production of a garment that illuminates the forms of construction

Read more on this article and deconstruction and fashion here.